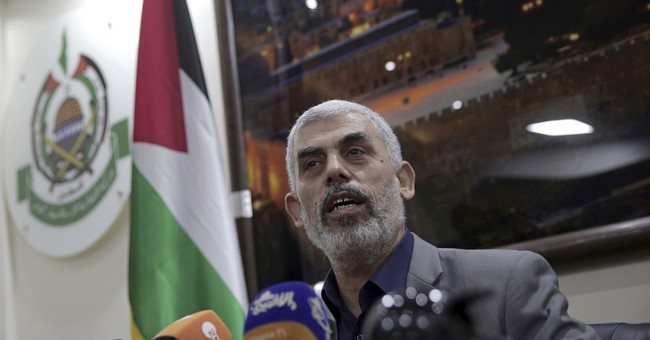 According to Hamas, 50 Hamas members were killed during their terror attempt to breach the Israeli border. The other 12 that Hamas claimed to have died appear to be some of the children that Hamas encouraged people to bring to the “Great Return March” to overtake Israel and massacre Israelis.Through the terrifying attempt to breach the Israeli border, Hamas terrorists achieved significant destruction only half a mile from Israeli homes. They have thrown rocks and explosives, released firebomb kites into Israeli towns with swastikas on them (because they want to burn “the Jews,” they explained to NPR), used wire cutters and rope to tear down the Israeli border fence, burned tires to create black smoke to conceal their actions and create difficult sights for the Israeli military, threw molotov cocktails to burn down Israeli farms, burned their own gas lines, displayed fake handicapped victims, and of course used children as shields.

Thought all of this, and to this day, they maintain the lie that they “chose a peaceful way to demand their fundamental rights.” Lies work for these people, thanks to big-media who hates Israel.

Israel tried to stop these people from becoming violent. IDF dropped leaflets telling the Palestinians that the terror group is just using them, endangering their lives and stealing their money. But Hamas was counteracting these attempts, offering “$100 per family that comes,” to the border, asking Palestinians to bring their children.

Hamas is calling their dead terrorists and dead children “martyrs.” A martyr, shahidin Arabic, is a term used to honor Muslims who have died fulfilling a religious commandment, especially those who die waging jihad, or historically in the military expansion of Islam. Hamas is trying to convince the Palestinians that Hamas deaths were religiously heroic. Their people are walking around shouting, “with souls and blood we redeem you martyrs!”

Right now, Hamas is proudly featuring dead Palestinian children. They do this for media support. Hamas is also turning away medical supplies from Israel, probably in hopes of higher numbers of dead.

This is part of their media strategy, to try and get the Westerners to hate Israel. And if you watch big-media news, it appears to be working.

In the UK, people were marching in the streets, protesting against Israel and calling them baby killers.

CNN was busy covering all of the apparently bad things that Israel was doing, and intentionally concealing everything that the Palestinians were doing. CNN was intentionally trying to create the story that Israel was bullying and murdering these innocent “protestors.” CNN blatantly IGNORED why the Israelis had to shoot, and who these Palestinians were, and what they were doing to receive such a response from Israel. I watched multiple clips from CNN to this effect. CNN didn’t even flinch at watching these people bring babies into the fight. This is why I accused them of spreading FAKE NEWS when CNN started these shenanigans on Monday.

Hamas has won the media. Now the question is this: WHY does the media want to be a terrorist organization’s right arm?