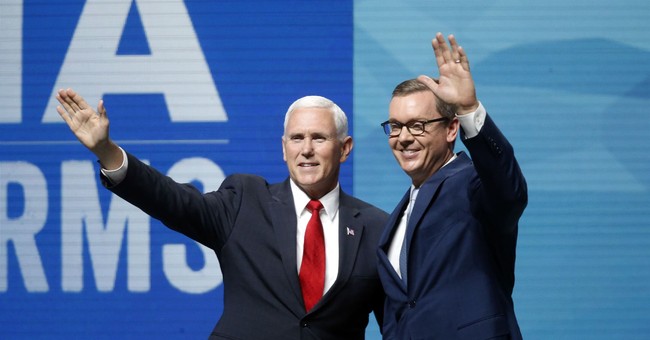 I watched as stone-faced Patricia W. Hill, a “Research Assistant Professor” from the University of Nebraska-Lincoln, was found guilty on May 21, 2018, of a misdemeanor crime for defacing the private home of NRA’s Chris Cox.

Cox is the charismatic Executive Director of the Institute for Legislative Action, the political and lobbying arm of the National Rifle Association. Patricia Hill – well, she is not a fan of the NRA.

Cox’s security detail observed and recorded Hill as she approached his home and sprayed red substance on the front steps of the Cox family residence. The substance appeared to be the color of blood, Cox testified.

His security guard testified that this is not the first time that he observed Hill, and that she had a prior transgression at the Cox family home before this incident. The court did not get into the details of that incident as Hill is expected to have a criminal trial on the separate offense at a later time.

From that trial, we learned that Cox’s Virginia family home was targeted by leftist professors on at least three separate occasions. From media coverage, we learn that it has been even more often than that.

The women targeting Chris Cox are from Nebraska. They are professors and politicians. Defendant Patricia Hill specializes in “Women in Science.” Melody Vaccaro is a leftist politician and an outspoken hater of the NRA. Their comrade, UNL professor Amanda Gailey, traveled to Virginia on prior occasions and told the Washington Post that Chris Cox “is a truly indefensible human being.”

These professors and the politician appear to be connected by liberal extremism and their hatred of guns. They are in charge of groups called Nebraskans Against Gun Violence and The Great American Gun Melt, where they ridicule American gun culture and vow to radically stop it.

The Great American Gun Melt intentions are clear: “Our strategy is to name, blame, and shame apex gun predators and push hard-hitting messaging,” they proudly state on their Facebook page, which lists UNL professor Amanda Gaily as a co-founder. “If I made [Cox] uncomfortable at his house, too bad, he deserves it,” said Catherine Koebel, the other co-founder.

Melody Vaccaro, who was with defendant Hill in the courtroom, is the vice president of Nebraskans Against Gun Violence. Amanda Gailey is the proud president of that organization. A GoFundMe page for the group raised $1,634 in 2015.

These leftist extremists are filled with an incredible amount of hate for an individual who was hired by the 5 million and growing NRA members to fight for their Constitutional rights.

These women deliberately travel from Nebraska to Virginia (a minimum of $325 each way, which may be a clue as to the GoFundMe fund usage), locate the private home of a family man who works for the NRA, invest in defacement products, damage his private property, protest in front of his home, protest in front of his wife’s unaffiliated private business, and explain entitlement to do all of this because of politics. They have done this numerous times, and they are proud of it.

And they plan to return. Hill’s lawyer opposed the prosecutor’s request to ban Hill for the 500-foot distance from Cox’s home. While unsuccessful, the argument certainly gave us a glimpse of his client’s desire to return to Cox’s home. Otherwise, the 500-foot distance wouldn’t be objectionable to someone who resides in Lincoln, Nebraska, a 1,212-mile distance from Alexandria, Virginia.

These leftists direct their hate at Cox as an individual, as a man. Not his office, not the NRA, but Cox’s family home is the target. Cox resides in the home with his wife and children. He testified that he has to take his family and leave his home when these protestors come to his home.

Their strategy is purposefully vindictive. Gailey and Koebel explained to The Washington Post their aim is to introduce a more radical approach to gun control activism and to shame Cox in his own home, rather than at NRA headquarters, where they say he could easily ignore it. The leftist radicalism is alt-left ideology.

This justification of extremism that transcends civilized political discourse is my definition of alt-left. Next step over is Antifa, who believe that destruction of property and violence is “necessary” to achieve leftist goals (leftist militia).

The idea that politics transcends decency is nothing new for the left. It has been a growing epidemic even outside Antifa and the alt-left. But for a group that supported Hamas and MS-13 in the same week, can we expect anything less?