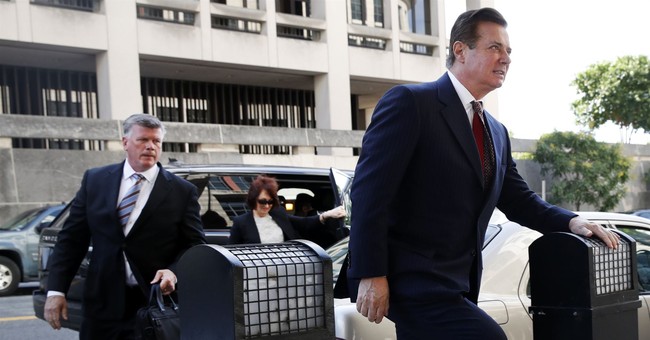 Paul Manafort is asking a Federal court in Alexandria, Virginia, a D.C. suburb, for a fair and impartial jury, and hence a change of venue. Manafort and his lawyers believe that the political climate in Northern Virginia would be too politically biased for Manafort to receive a fair jury trial.

“It is difficult, if not impossible, to divorce the issues in this case from the political views of potential jurors,” Manafort’s lawyers contended. His lawyers referred to the pretrial publicity as a “theater” and “showdown,” explaining to the judge that a fair, unprejudiced jury trial will not be possible in this jurisdiction under these circumstances.

Moreover, bearing suburban proximity to D.C., many potential jurors work for or with the Federal government in some capacity or another. And the ones who don’t, need to know what’s happening in the local news and watch their local D.C. metro area news reporting. “The individuals residing in the division are far more likely to have closely followed the developments and news coverage in the Manafort case in light of the division’s close connection with the nation’s capital,” his lawyers argued.

These D.C. suburbs also house voracious consumers of news and media. According to Nielsen, the DC Metro Area ranks 6th in the nation in the Top 100 Media Markets.

Adding insult to injury, the local D.C. news coverage has been unrelentingly skewed against Manafort. “A Google search for articles relating to Paul Manafort reveals 1,390,00 results. Reviewing these articles, one is hard pressed to find any that are not unfavorable to Mr. Manafort,” his lawyers added.

They’re not kidding. Washington Post anti-Manafort stories include “Why do all these criminals keep gathering around Trump?,” and “I worked for Paul Manafort. He always lacked a moral compass.” Combined with local anti-Trump headlines such as “It’s Independence Day, but Americans aren’t feeling so proud,” and “Trump budget proposal spells more pain for D.C. region,” the local Washington D.C. media outlets are doing their part of setting the stage for a prejudiced, anti-Trump and anti-Manafort verdict.

Under the Sixth Amendment, and reinvigorated by various Supreme Court decisions, all criminal defendants have the right to trial by indifferent jurors – free from outside influences. Jurors are supposed to base their verdict solely on the evidence presented at trial.

Acknowledging all of this, how is a D.C. metro area jury supposed to preside impartially over Manafort’s case and then render a verdict free from influences outside of trial?

Considering the 2016 Presidential voting record, massive publicity, skewed reporting, and robust media connectivity in the D.C. suburbs, Paul Manafort rightfully fears prejudiced jurors in the Eastern District of Virginia; especially when this trial is expected to be more about President Trump than anything else. “Given the investigation’s focus on President Trump’s campaign, even a blind person can see that the true target of the Special Counsel’s investigation is President Trump, not [Manafort] and that [Manafort’s] prosecution is part of that larger plan,” declared Judge Ellis, who is presiding over this case in Alexandria, in an earlier hearing.

Roanoke is the solution, according to Manafort’s team. Manafort can receive a fair and impartial trial in the Western District of Virginia, say his lawyers.

The Roanoke area ranks 70th in the nation in the Top 100 Media Markets. It is mostly rural, about a 4-hour drive from D.C., and the majority of the areas covered by the Roanoke Division of the Western District of Virginia voted overwhelmingly in favor of Trump during the 2016 Presidential election (with some exceptions in the city regions, which voted for Clinton). The potential jurors will be very different in the Roanoke area from the D.C. suburbs, I can tell you from personal experience. The change of venue to the Western District of Virginia will undoubtedly assuage Paul Manafort’s concerns about the impartiality of his jury pool.

A change of venue will help to solidify the verdict, at least on the grounds of venue. After all, the American people want closure with the trial, not endless appeals and a reversal based on Constitutional grounds.