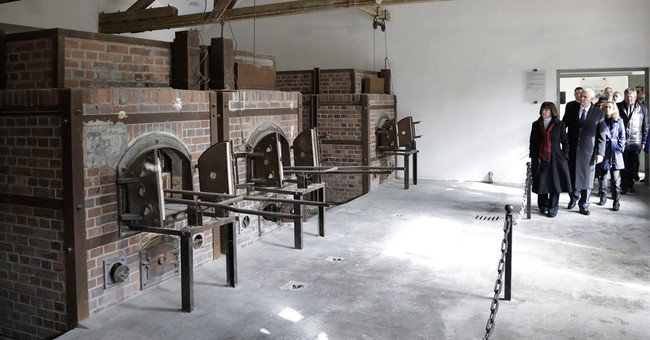 “The worst sight and the last place we visited were the cremation chambers at Dachau,” wrote American soldier Leon Morin on July 9, 1945, in a handwritten letter to his family.

U.S. soldiers liberated the Nazi concentration camp Dachau on April 29, 1945. What the Americans discovered shocked their conscience. Some U.S. troops were so overwhelmed and enraged by the horrors of this death camp that they executed dozens of Nazi camp guards.

Dachau was hell on earth.

“Nothing you can put in words would adequately describe what I saw there … All the stories of Nazi horrors are underestimated rather than exaggerated,” division assistant Chaplain (Maj.) Eli Bohnen, present at the liberation of Dachau, described in a letter to his family dated May 1, 1945.

American troops arrived earlier than the Germans expected them, writes Leon Morin, “they were caught with their pants down.” Nonetheless, Morin laments that the Nazis succeeded in killing 9,000 prisoners in anticipation of the U.S. arrival. “The S.S. were told to kill and cremate everybody before the Americans got there … they succeeded in killing 9 thousand and c[r]emated or rather half cremated more [than] half then they ran out of coal for the furnace …”

According to an official report on Dachau by Lt. Col. Walter Fellenz, commander of the 1st Battalion, 222nd Infantry, “There were over 4,000 bodies, men, women and children in a warehouse in the crematorium. There were over 1,000 dead bodies in the barracks within the enclosure.” Tech. Sgt. James Creasman, a division public affairs NCO in the 42nd Division World News, wrote on May 1, 1945: “Riflemen, accustomed to witnessing death, had no stomach for rooms stacked almost ceiling high with tangled human bodies adjoining the cremation furnaces, looking like some maniac’s woodpile.”

The gruesome reality of the scene at Dachau was described by Leon Morin like this: “… it will take 12 pages like this one to just give an idea about the best organized butchery in the world.”

“I shall never forget what I saw, and in my nightmares the scenes recur. No possible punishment would ever repay the ones who were responsible,” wrote Chaplain Bohnen. “The Jews were the worst off. Many of them looked worse than the dead. They cried as they saw us. They were emaciated, diseased, beaten, miserable caricatures of human beings. I don’t know how they didn’t all go mad. Even the other prisoners who suffered miseries themselves couldn’t get over the horrible treatment meted out to the Jews.”

Leon Morin does not identify the plight of the Jews and their children individually in his letter. He refers to all Dachau victims as “prisoners,” “people,” and “victims.”

“The gruesome part of was how they killed those people. Either by torture by the firing squad, mutilation with starved bloodhounds of which each camp had about fifty or sixty, and by mass gas poisoning …” wrote Leon Morin. He described the crematoria and gas chambers in detail. “The unsuspecting prisoners were marched in formation to this room which was supposed to be a shower room. Inside, the ceiling was all fixed with sprinklers nicely polished which had never beem used for water but nice jets of chlorine gas were forced through controlled by an S.S. guard who had a little window through which he could look over the victims without them seeing him … After five minutes there wasn’t one of them alive, or if there were it was just tough luck because all the bodies were thrown in the next room next to the crematory and a minutes they were all burned. That ‘Shower Room’ could hold 250 persons at one crack.”

Leon Morin was 29 years in 1945 when he wrote this letter to his family. The 10-page letter has never before been published. Leon’s sister Lorraine McAleavy and her son Tim McAleavy sent this very special letter for me to share with our readers. I will be dedicating the next few columns to Leon Morin’s historic letter.